Influencer marketing has been growing in popularity over the past few years. The idea is simple: connect with someone who has hundreds of thousands (if not millions) of followers on social media. By connecting with an influencer, you in effect obtain access to their audience. As a result, you can significantly boost brand awareness as well as increase your own audience. While many businesses have been scrambling to develop relationships with such influencers, more crafty businesses have been adopting a different strategy: micro-influencer marketing.

What is Micro-Influencer Marketing?

Traditional influencers are individuals who have name recognition within your industry. They have enormous audiences who trust what they say and what they do. When they promote a brand, that brand will get a lot of attention as a result. Micro-influencers don’t usually have as much name recognition. In fact, many of them are not widely known at all. They have audiences that are much smaller. Typically, they will have less than 100,000 followers. In some cases, they may have less than 10,000 followers. Micro-influencers also tend to focus on more niche subject matter as opposed to traditional influencers (or “macro-influencers”).

The Benefits of Micro-Influencer Marketing 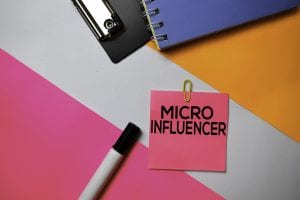 At first glance, it might be difficult to see any benefits of targeting micro-influencers instead of macro-influencers. After all, why would you want to target an influencer who seemingly has much less influence? The following are  some of the reasons why micro-influencer marketing can actually be incredibly effective:

Most businesses are familiar with influencer marketing. Any business that has decided to invest in influencer marketing is likely going to target individuals with the most influence. This makes sense, as these influencers likely have millions of followers and lots of name recognition. The problem, however, is that all the businesses within your industry are going to be targeting the same couple of influencers. Because micro-influencers are much less well known, it will be much easier to get into contact with them and to develop a relationship with them. Not to mention that most micro-influencers are more niche-oriented, meaning that they will be relevant to fewer businesses in your industry.

Enjoy The Article: The Power Of An Influencer Marketing Strategy: How and Why It Works

Influencers who have millions of followers are going to have tons of suitors lining up to pay them for their influence. This means that getting a macro-influencer to highlight your company in some way is going to cost you a lot of money. Since micro-influencers are less well known within your industry, they are going to be much less expensive.

Even though micro-influencers have smaller audiences, they are likely going to be much more relevant to your company. This is because micro-influencers are focused on a specific niche. If that niche is related to your offerings, odds are their audience will be your audience. When it comes to macro-influencers, their scope tends to be much broader. This means that your brand may not be relevant to a significant number of their followers. As a result, not only are micro-influencers more affordable, but you’ll be using your money in a more effective way, leading to a higher ROI (return on investment). It’s one of the reasons why conversion rates using micro-influencers tend to be higher as well.

While you shouldn’t completely give up on macro-influencers (especially if you have the budget required), you may find that targeting micro-influencers will end up being much more effective. Not only do micro-influencers cost less, but you’ll also have a much better chance of reaching and engaging their audience, leading to a higher conversion rate and a higher overall ROI.

Inbound Marketing Strategies To Use During The Pandemic Scroll to top