Businesses tend to put extra effort into their advertising campaigns during the holiday season. While this is in part because people are buying gifts for one another, which means that there’s a general spike in sales, it’s also because Black Friday and Cyber Monday have become national institutions in themselves, a time when people search out great deals for things that they want. Because almost every business big and small offers deals at this time of the year in order to attract customers, stepping up your advertising efforts is the only way you’re going to stand out from the crowd.

The following are a four examples of some of the holiday marketing campaigns that have stood out over the past few years:

Coke put a twist on their famous “Share a Coke” ad campaign by running a holiday campaign that showed people sharing a coke instead of fighting over products at a mall. This ad works well because not only are people already familiar with the basis of the campaign, but they can also relate to fighting the crowds to get what they want before it sells out.

The online hotel booking site’s clever campaign was headlined by the slogan “Visit, Don’t Stay.” This refers to how family members often visit one another and generally get into arguments or on each other’s nerves due to the holiday stress. Instead of staying with their family, they can stay at a hotel and simply “visit” their family.

John Lewis & Partners released their “Boy and his piano” commercial featuring Elton John this year that quickly went viral. It showed Elton John playing a song as the camera speeds through time, showing John as a younger and younger musician performing in front of huge crowds, finally settling on a version of him as a young boy getting a piano for Christmas. This ad is effective because of its use of a celebrity, its message of how a gift can change someone’s life (making it relevant to the holiday season), and in creating a feeling of nostalgia. The ad was particularly effective in that it did not specifically promote a product or sale, relying on its message to be its call-to-action.

McDonald’s has used a variation of a campaign in which Santa stops by for a bite to eat at McDonald’s during his Christmas run for years now. But this year, McDonald’s stepped it up by making their ad campaign more interactive. For example, Spapchat users can play a game that makes them look like a reindeer and that requires them to catch as many falling carrots as they can.

Use these five tips to craft a marketing campaign that will help you stand out during the busy holiday season: 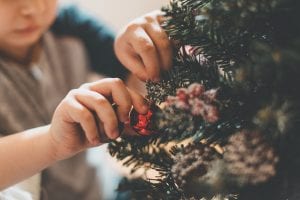 This one’s obvious, but find a way to tie your product or service into the holidays. The previously mentioned ads are great examples of how this can be done.

People often feel sentimental during the holidays, which means that using nostalgia is an effective way to make an emotional connection.

The holidays can be quite stressful, which is why an ad that can make consumers laugh will stand out. See the HotelTonight ad as a fantastic example.


4) Make your offer stand out

Whether it’s a huge discount, a free trial, free shipping, or something else, your offer should stand out to make your ad stand out.

Get consumers engaged. This can be done by finding ways that consumers can interact with your campaign, whether it’s by holding contests or by providing short games that they can play, in the same way that McDonald’s did this year.

Mark Beebe oversees all current clients. His secondary focus is leading the creative with original thinkers who provide innovative processes and insightful answers for clients’ marketing needs. His 30+ years has garnered the team to over 50+ national and international awards. As a partner, Mark, looks for unusual solutions to bring smart results and metrics to your bottom line.
https://stevens-tate.com/wp-content/uploads/iStock-882833782_lowres.jpg 963 1500 Mark Beebe https://stevens-tate.com/wp-content/uploads/STLogo-websml-biggerAM.png Mark Beebe2018-12-13 08:00:482018-12-19 00:37:57Creating Successful Holiday Marketing Campaigns
Subscribe today to stay current on marketing trends.

Stevens and Tate Named Top Ad Agency in 2018 By Clutch.co! Scroll to top